The Piebald Dachshund- a Complete Guide to Understanding This Pooch

by Cathleen Nelly﻿ in Dachshund

Among the dachshunds, the Piebald Dachshund is quite popular. Though rare, this pooch is intelligent and brave. He comes in various colors.

This pup’s coat consists of a basic white color. This color is accompanied by spots and patches. These spots are mostly gray, brown, or black. 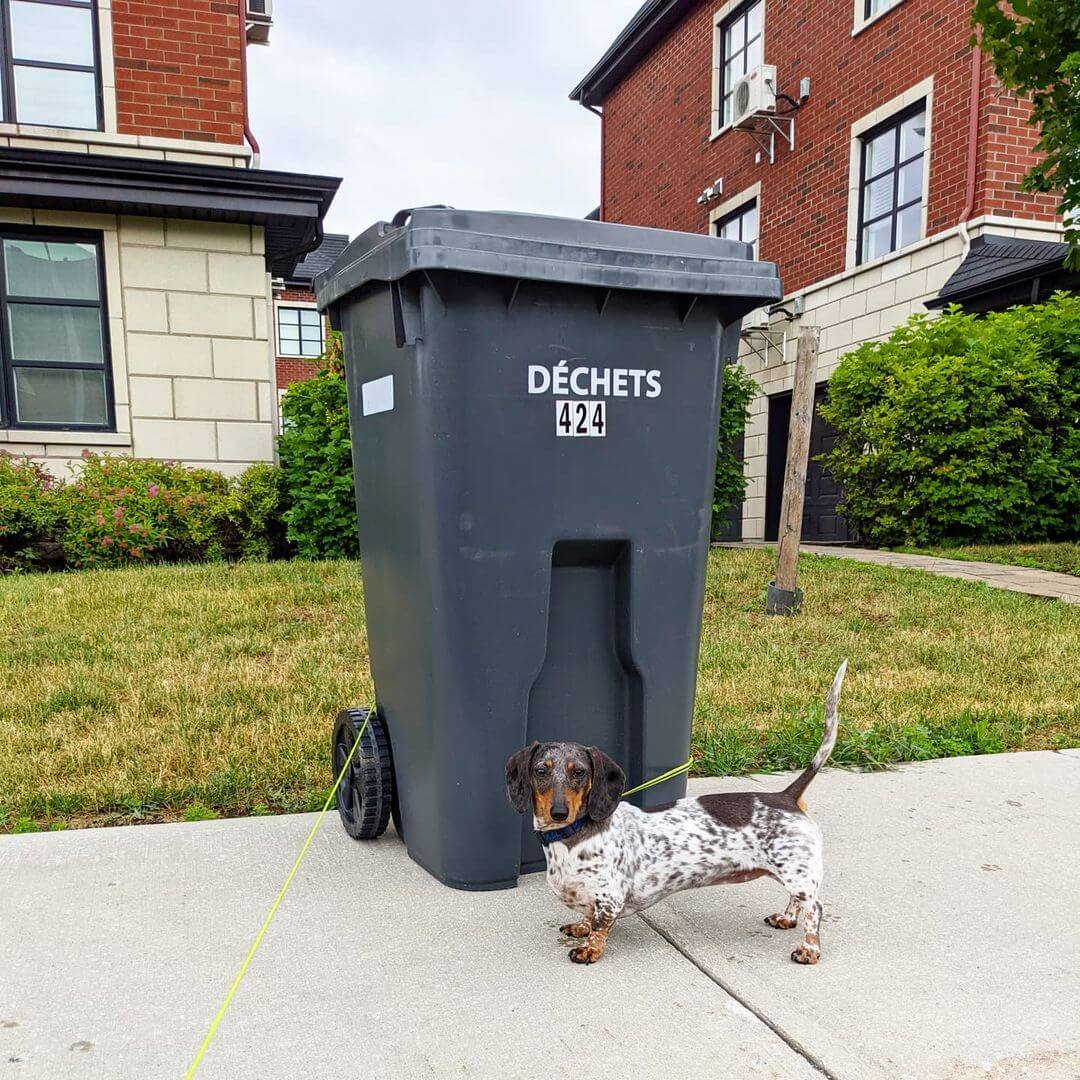 The Piebald Dachshund is also known as “Piebald Sausage.”

A unique feature to note about the Piebald Dachshund is his courage and vigor. Despite his small size, this pup makes a tough watchdog.

The pup’s unique attribute and behavior have had a great impact on its popularity in the US. He is ranked 13th in popularity.

In this article, you will receive a comprehensive guide regarding the Piebald Dachshund pooch breed. You will get to know why it’s among the greatest canines.

A Brief Description of the Piebald Dachshund

The Piebald Dachshund was first bred in Germany. Its main role was to hunt badgers.

Many believe that it’s because of this that he earned the name “badger dog.” Apart from that, this canine was known for hunting down and killing boars.

In addition to its formal name, this dog breed is also called “Wiener dog.”

Currently, the Piebald Dachshund is known for its intelligence and bravery. In case you live in an apartment, this pooch best suits you.

This puppy is unique. It loves being next to its owner most of the time. When he’s around you, keeping him engaged through constant play is advised.

One major disadvantage of the Piebald Dachshund is his stubbornness. This puppy demands being given whatever he wants. He also loves constant attention.

The Piebald Dachshund and the Dalmatian breed bear close similarities. These pups have a similar color pattern. They are primarily white. This gets accompanied by several spots and patches. This pooch is either black, tan, or gray.

The Physical Appearance of a Piebald Dachshund Pup 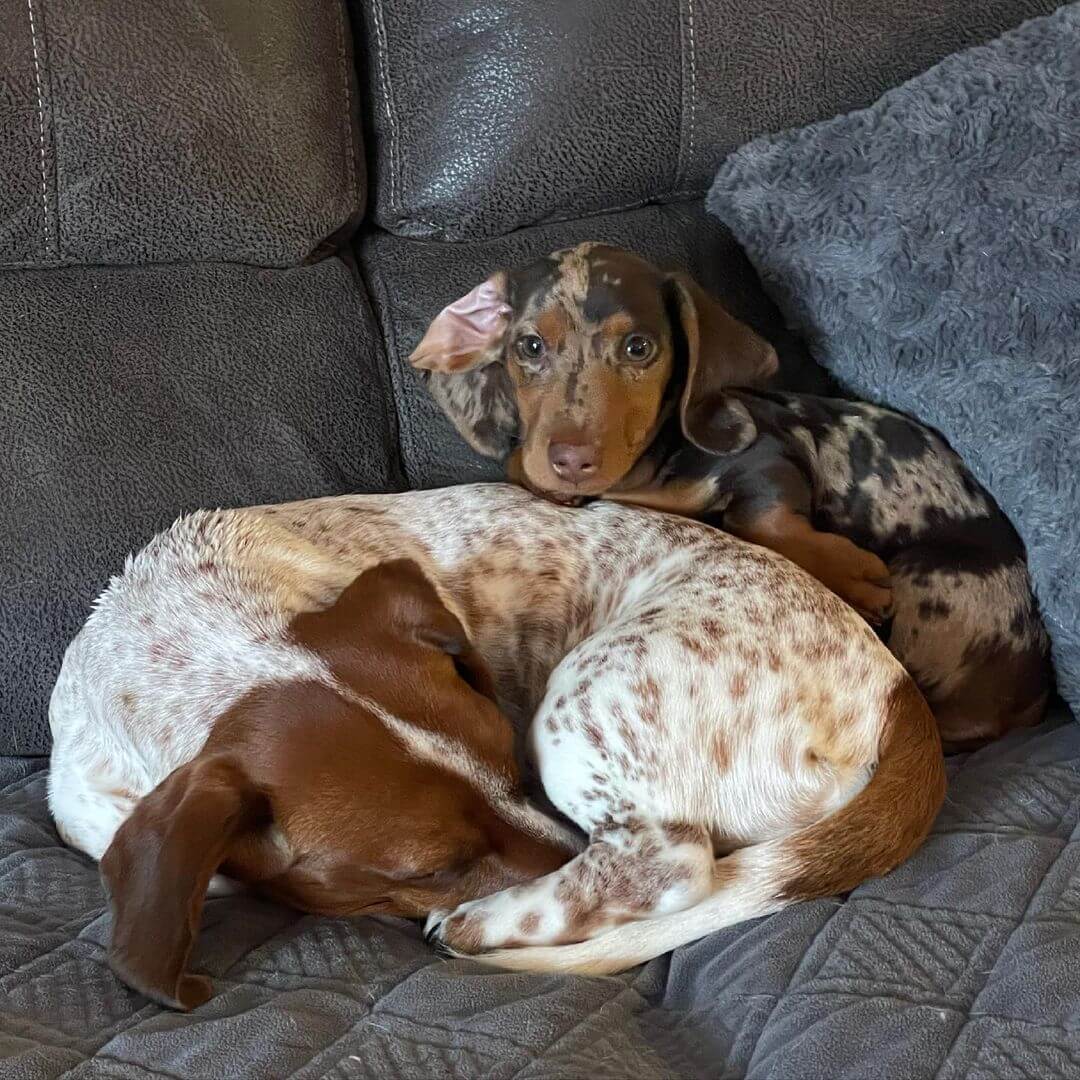 A unique feature about this doggie is his elongated back. In addition to that, he has short chubby legs and a low muscular frame. The Piebald Dachshund has low, hanging, and floppy ears. They also have paddle-shaped paws. This feature helps them when digging on the ground.

Apart from having small paws, this pooch has a slender and long face.

Generally, the piebald is a goofy breed. Most of these doggies have blue eyes because of no pigmentation.

A typical Piebald Dachshund puppy can have one of the following coat varieties; wire-haired, long-haired, or short-haired.

The wire-haired breed has a soft undercoat accompanied by a wiry outer coat.

On the other hand, the long-haired have a long flowing coat. They are the most attractive of the three.

Finally, the short-haired breed has a short and shiny coat. The coat is also silky.

Just like other breeds, the Piebald Dachshund also sheds. Shedding depends on the type of coat.

Despite being intelligent, this pup is quite stubborn. As has already been said, they love seeking attention.

This pooch is quite playful, thanks to his great energy. Moreover, this doggie loves being close to his owner.

He loves being caressed from time to time. Most often, this breed loves bonding with only one or two individuals.

Due to his protective nature, the Piebald Dachshund barks frequently. This barking may sometimes become irritating to those not used.

This pup can typically bark at anything. Even when bored, he may start barking uncontrollably. However, proper socialization can help solve this problem.

Can the Piebald Dachshund make a good family dog?

Yes, the Piebald Dachshund can get adopted. He can do well in a family setup with proper socialization.

Despite being rough with children, you can try as much as possible to make him get used to kids. This can get accomplished through regular supervision when kids are around him.

Also, this canine can become aggressive when he sees other dogs or animals. He isn’t that friendly.

Is It Possible to Breed Two Piebald Dachshunds?

The only precaution you need is whether the parents have the dapple gene.

Breeding dachshunds with the dapple gene is quite risky. It could lead to the formation of double dapple puppies. Such puppies are prone to various health conditions including congenital defects in the eyes and ears.

It’s important to note that some Kennel Clubs do not approve of the piebald pattern for dachshunds.

Can We Have an All-White Piebald Dachshund Doggie?

Yes, in some instances, it possible to have an “extreme piebald.” This term implies that the pup is entirely white. Despite that, such a type of breed is considered very cruel. Therefore, most Kennel Clubs do not approve of it.

It’s also possible to have a Piebald Dachshund with several pattern coats. This could include a dapple piebald or dapple brindle piebald.

Most dog owners love blended patterns. Before buying any pup from a breeder, you should have enough information. This factor is to minimize the chances of acquiring a cruel pup. Sometimes, the genes used to create the pups might have had some incompatibility issues.

Is it true that this breed is rare? The dachshund breed with a pied pattern is considered rare. Despite that, the growing affection among dog lovers has increased his demand.

Therefore, more pups are being bred to meet the increasing demand. This pooch is gaining much popularity.

How do piebald and dapple dachshunds compare?

Dapple Dachshunds is darker and has little white patches and spots. On the other hand, Piebald Dachshund has a white base color with a few dark spots and patches. The difference between these doggies also exists in their genes.

What is the lifespan of a Piebald Dachshund breed?

Like most crossbreeds, Piebald Dachshund has a long lifespan. He can live for 12 to 16 years.

What is the litter size of this pooch?

On average, the Piebald Dachshund gives birth to puppies from as low as 1 to as many as 6.

How much will it cost me to own a Piebald Dachshund?

Prices for these doggies range from 600USD to 3500USD. The common factors that determine price include location, medical charges, and the type of dog coat.

The Best Way to Groom a Piebald Dachshund

For this pooch, grooming varies based on the type of coat. The coat pattern is of little concern during grooming.

For the long-haired and wire-hired breeds, coat brushing needs to be done thrice a week. This helps prevent knotting and dangling.

The short-haired pup needs grooming only once per week. This is enough to keep his coat smooth and shiny.

Moreover, the long-haired and wire-haired Piebald Dachshund will need coat stripping at least thrice a year. This helps create room for healthy regrowth.

The dachshunds do not accumulate much dirt on their fur. As such, matters of dog odor should never bother you.

Additionally, this pooch doesn’t require frequent bathing. This can only be done once every six weeks.

Also, do not forget that, like any other doggie, the Piebald Dachshund needs regular dental care and nail clipping.

How Much Exercise Is Required for This Pup?

The Piebald Dachshund is considered quite energetic. Regular exercise is required for his fitness.

This pup loves regular walks. You should take him to the dog park frequently. Two walks per day are recommended.

On average, daily exercise should take between 30 to 60 minutes. Also, each walk should last for about 15 minutes.

A quality diet is recommended for this pup. A larger portion of the diet should consist of proteins. You should regulate carb and fat intake.

A daily intake of about 1 cup of quality kibble is recommended. The meal should be provided in two or three sessions.

The recommended daily calorie intake is between 200 and 500.

Since this puppy is prone to obesity, you should always watch out for its diet. Obesity is bad since it affects its elongated back.

Despite being intelligent, this pup is quite stubborn during training. Therefore, your patience is vital. Also, consistency in training is necessary.

You should let the dog know that you are in charge of the training session. However, aversive training techniques should be avoided.

The success of the training can get accomplished through positive reinforcement. You should always motivate your dog after a successful training session.

This helps enhance its learning capabilities. When given a reward, he will stick to the training guidelines. He will even learn new tricks taught!

Socialization is equally important for your pup. From an early age, you should train your Piebald Dachshund to be welcoming to strangers.

This could also include other dogs and domestic animals.

The stem cells are located within the pup’s inner ear. An absence of stem cells may hinder the development of the unique layer responsible for hearing.

When selecting the right Piebald Dachshund puppy to adopt, you should look at the amount of white hair. Also, check his head coloring.

Those pups with a larger percentage of white hair around their head and ears can get affected by congenital deafness.

However, those doggies that are nearly all-white but have a solid coloring are not prone to this condition.

In addition to physical examination, you can also use the BAER test. This test helps you to determine the health of the pup you intend to buy.

You should not entirely get worried when your pup gets affected by congenital deafness.

If the required care is provided, it can live a normal life.

Other Potential Health Risks for the Piebald Dachshund

This pup is also likely to get affected by spine issues such as IVDD. Therefore, you should take the necessary steps to ensure your dog is free from any form of pressure on its back.

The Piebald Dachshund can also experience weight gain within a very short time. You need to keep a healthy diet to avoid issues of obesity.

Regular exercise is also important to keep this canine active. Simple activities like jogging and playing with toys could help.

This pooch can also get affected by various body injuries.

This is because he loves jumping on and off objects like the sofa and also staircases.

You should restrict this canine to prevent any injuries.

How Can You Acquire a Piebald Dachshund Pup?

You can acquire your favorite puppy by purchasing it from breeders.

However, you should engage reputable dealers to ensure you acquire a healthy pup.

A rescue shelter is another place from which you can acquire the piebald. This is a good place if you are on a budget. Mostly, the pooch is given out for free.

The main challenge with acquiring a pup from a rescue center is domestication. Some of the pups are difficult to control.

Also, some may come with health issues that are difficult to treat.

Another way to acquire a Piebald Dachshund is through dog owners. You may find someone whose pooch has some litter.

You can negotiate the price or sometimes you may be offered the pup for free.

Moreover, online forums form another platform for purchasing a dog.

Platforms such as Facebook and online marketplaces where products are advertised can be a good option.

The Piebald Dachshund breed is an intelligent and brave pup. This doggie has attracted many dog lovers due to its unique features.

Despite his stubbornness at times, this breed is worth adopting. You only need to provide the necessary training.

This breed has gained popularity due to its basic white appearance accompanied by spots and patches of various colors.

Do not hesitate to adopt this doggie if you need a new companion in your living space or apartment.