The Labradoodle dog breed initially originated in Australia in the year 1988.

It was created by an Australian breeder called Wally Conron.

In his attempts to create a dog that better-suited people who were allergic to dog fur, he decided to cross a Labrador and the standard poodle to make a dog that could be used as a guide dog.

Poodles possess features like having hypoallergenic coats, thus favoring people who have allergies to dog fur. In addition, the Labradoodle contains features like being eager to please its owner, being very loyal, and being very easy to train.

Therefore, these features are very suitable when passed on to the breed. 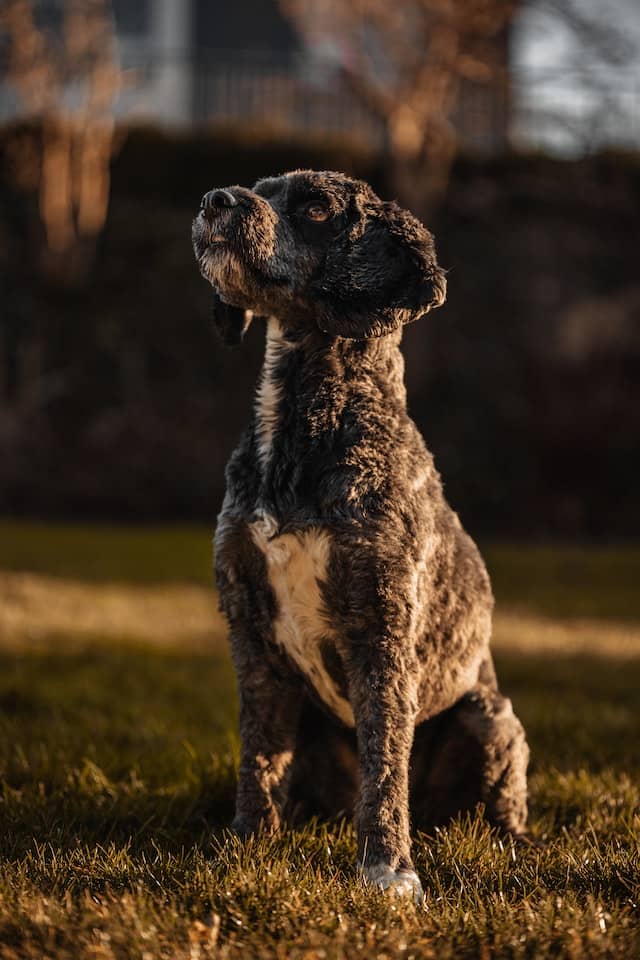 Although this dog initially did not catch on, it became prevalent in western countries over the years.

As a result, it became the most popular dog breed, which spread from households in America to most cities in Australia.

Labradoodles serve the family members in many ways, such as guiding their owners and providing services depending on the environment, offering therapy services, and being a family pet.

The world fell in love with the breed for its loving and intelligent nature, for they also appear very energetic and sometimes hypoallergenic.

Moreover, it has a plush coat, adorably looking eyes, and is a very playful puppy that is always ready to show affection to its owners.

They appear to be lap dogs until they age, even if they become too big.

The dog breed comes in many different colors, whereby you can find some appearing in red, black, cream or chocolate, silver, and many more, depending on the color of the crossbreed.

Labradoodles also have different furs, where some appear to have wavy coats, which are the most popular, whereas others have sporting curly hair. 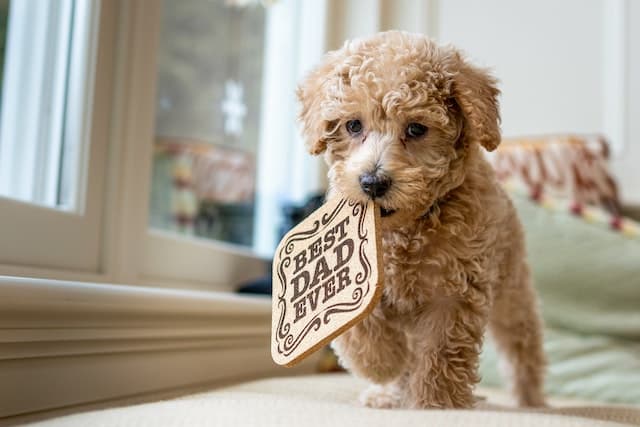 Their weight depends on the poodle used in the first generation.

They come in three different sizes, with an average weighing up to 65 pounds, whereas the medium ones weigh between 30 and 45 pounds, and the mini ones weigh 15 to 25 pounds.

They make very great family pets because they are very affectionate and easy to train.

A Labradoodle appears to be a delighted dog when around people they love.

They are very good at showering their family with devotion and affection.

The combined features of a poodle and the energy of a Labrador retriever are a joy when playing and engaging in fun activities.

It is also known to have a lot of enthusiasm when it comes to approaching new friends and when it comes to their training, they are straightforward to train in that they are brilliant dogs who can also be pleased easily.

Moreover, it can be around other pets such as cats in the household and are also friendly with children; although through sheer boisterousness, they may injure young children unintentionally, they make a very excellent choice for a first-time dog owner.

They appear to be calm and quiet sometimes when curled up on their owners’ feet but are ready to engage in games such as fetch within a fraction of a minute, for they are very attentive.

Generally, Labradoodle is not an ideal dog for security.

However, it will alert the owner that if an intruder comes by barking, they are more likely to welcome an intruder in a friendly manner.

Like any other dog breed, this type of breed can be adversely affected by some health conditions that need a lot of attention to ensure that your pet is healthy for a longer lifespan.

Here are some health conditions that one should be aware of to keep this type of breed always healthy and happy.

They are known to adapt very well to about just any setting.

Still, it is not recommended to keep Labradoodles inside apartments, for they require about 30-60 minutes of training every day; thus, they need a fenced compound to find space to roam around while exercising.

They make a perfect companion, especially when you are jogging in the morning, but they need some time off, especially when they appear bored or tired, for they can be a nuisance; thus require to be unleashed from time to time.

The Labradoodle is a knowledgeable dog that also happens to be very easy to please, thus making it better for training.

So long as the owner uses positive reinforcements and consistency when training the dog, it should be pretty easy.

Also, this breed requires socialization from puppyhood, for they tend to react to other dogs, especially if the stranger dog happens to be aggressive.

They should also be subjected to crate training to ensure that they can avoid accidents inside the house.

Ensure that your dog is at ease during confinement or when they need to be hospitalized.

Crate training is highly recommended from an early age.

The dog should spend at least a few hours in the crate, but you should avoid keeping him in the compartment for so long, for he may become disoriented except when they require sleep.

When it comes to feeding your pet, you must provide them with high-quality dry foods.

They usually consume 1-2.5 cups of food divided into two meals.

To ensure that your Labradoodle is in good shape, you need to ensure that you feed them considering their size and their activeness, for active dogs appear to consume more than dogs that are dormant. The food should also be high quality to ensure your dog is well nourished.

By dividing the meals into two, your dog will be sure to be fed twice a day, thus preventing him from being overweight due to food being left outside for him every time.

If it becomes unclear to you if they are overweight, you should perform a hands-on test and the eye test on them.

This type of test is performed by looking down on your pet.

Thus you should be able to see his waste and then place your hands on his back with your thumbs along the spine and your fingers spread down.

If you happen not to feel the ribs without much struggle, then it is evident that you need to feed him less food and have him undertake more exercises.

By feeding your Labradoodle twice a day instead of giving him the entire meal once, you prevent the dog from having conditions of bloating, also known as gastric torsion.

When it comes to grooming your dog, it mainly depends on the length and the type of coat your dog has.

Therefore, you are expected to brush him at least twice a week.

But, again, it depends on the kind of coat where; some can be treated every 6-8 weeks to ensure easy coat maintenance.

A Labradoodle should only be bathed when it deems necessary, which is not done often for their coats do not emit a doggy odor that one can notice.

Also, this breed is prone to ear infections, so it requires extra care for their ears, which is done by ensuring they are always clean and dry after engaging in activities like swimming or bathing.

You should always check the ears for dirt at least once a week to control any noticeable odor that can cause an infection.

It is done by wiping their ears using a cotton ball that has been carefully dampened in a pH-balanced ear cleaner to avoid ear problems.

Labradoodles are also prone to dental problems, so their teeth must be brushed at least twice or thrice a week to remove bacteria and tartar, which may build on their teeth.

Their nails must also be trimmed twice a month to prevent painful tears.

In addition, their nails need to be clipped, for they have veins and may bleed if cut too deep.

The long claws are mostly noticed if the dog begins to scratch the floor, which means they are too long and need to be trimmed.

If this seems complicated, you can borrow some pointers from a vet or a groomer.

Generally, your pet requires brushing and examination from when it’s a puppy.

Handling your pet with care ensures easy and cheap examinations whenever you visit a vet.

They are excellent service dogs and favor everyone’s taste, for they come in different colors and sizes, thus making it easy for people to choose the dogs according to their liking.

Also have many coat textures, with 14 coat textures associated with this breed, thus giving people many options in what type to pick.

On top of that, it is a good therapy dog for it offers a lot of love, affection, and companionship to the owner and is also favorable to people allergic to dog fur.

More so, this breed does not have the condition of shading furs often, unlike other dog breeds, thus making it increasingly popular among most families over the years.