by Cathleen Nelly﻿ in Rhodesian Ridgeback

The Rhodesian Ridgeback is an intelligent, charming, and endearing dog breed of South African origin.

The breed was created to be an all-purpose ‘Renaissance Hound.’ However, nowadays, you’ll mostly see them playing or jogging with their owners.

In this article, we’ll take an in-depth look at The Rhodesian Ridgeback dog breed and see if you should consider owning one of them.

The Rhodesian Ridgeback is a large-sized, athletic hunting dog breed of African origin. 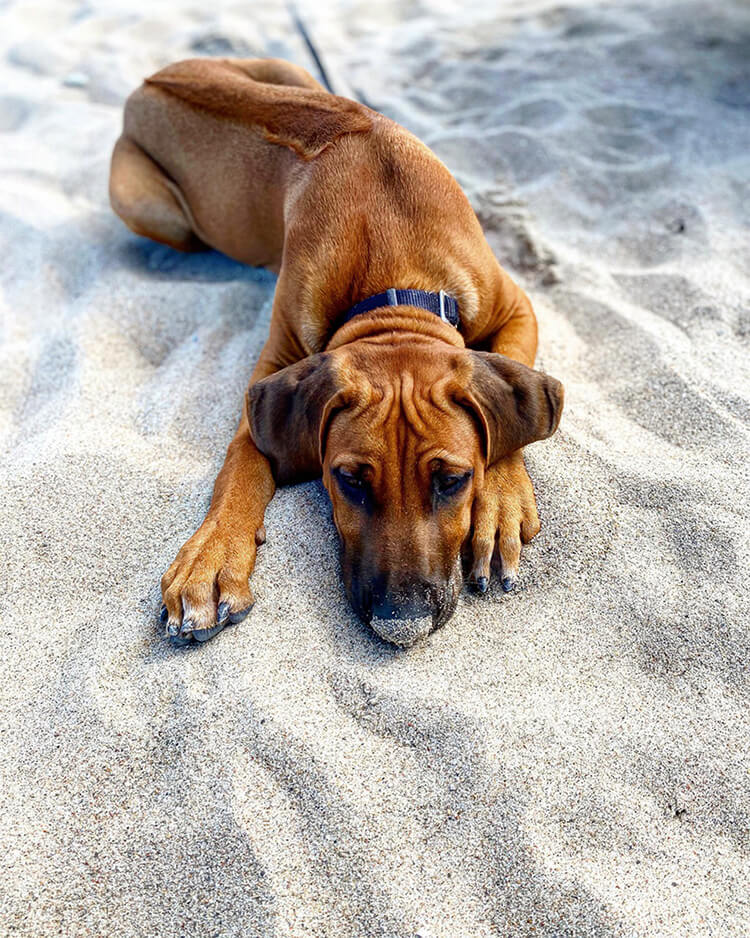 The breed is easily noticeable due to a characteristic stripe of backward-growing hair on its back.

Rhodesian Ridgeback was created in Southern Africa for hunting large animals like boars, bears, and even lions.

However, things have changed since then, as now they are well suited for domestic life and are considered gentle family companions.

They have quite affectionate personalities and can easily get along with anyone.

They’re truly trustworthy and devoted to their owner.

Thanks to their tall and cunning appearance, Rhodesian Ridgebacks are quite popular among dog lovers. 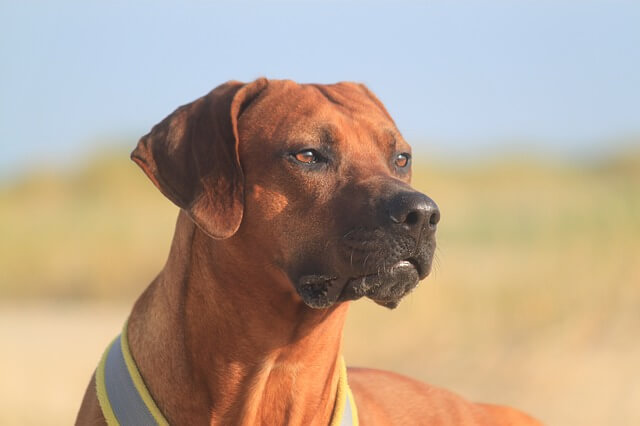 When it comes to their physique, they’re quite athletic and agile due to their long legs and slim body.

Their thin wheaten-colored coat shines under the sunlight, making them an absolute delight to look at.

Overall, The Rhodesian Ridgeback is definitely one of the best-looking larger dog breeds out there.

A group of Boer farmers created the Rhodesian Ridgeback in Southern Africa. 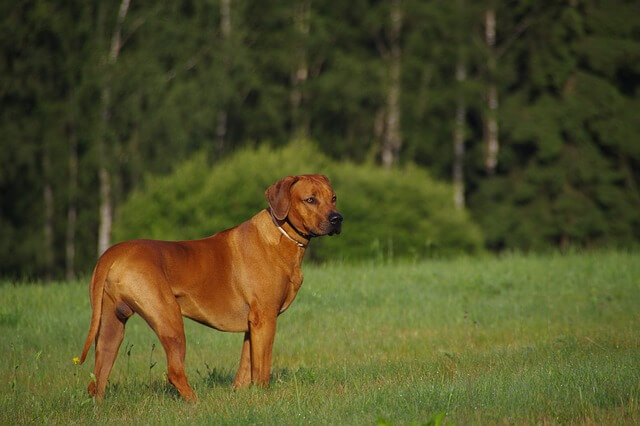 The breed resulted from crosses between European Terriers, Mastiffs, KhoiKhoi Dogs, and Bloodhounds.

Upon their creation, the characteristic ridge of hair running along their spine made one thing clear; they were hunting beasts.

They proved themselves and quickly became one of the best hound dogs of their period.

In 1924, The Rhodesian Ridgeback was officially admitted as a breed by the South African Kennel Union.

By that time, they were also gaining popularity in America.

However, World War II really made it for the breed, as many Rhodesian Ridgebacks were imported to the USA and Britain to work in the military.

And soon after, in 1955, the breed was officially considered by the American Kennel Club.

As of the present day, the breed has come far off being a hunting dog, as now they are considered some of the best companion dogs for families.

Here are the characteristics of The Rhodesian Ridgeback based on different categories.

Rhodesian Ridgebacks have an affectionate and independent mentality.

So they’re like a great mixture of all emotions.

They can be playful, entertaining, funny, as well as frustrating.

Younger Ridgies are often naughtier, whereas older, matured Ridgies are gentle and calm in nature.

Overall, owning a Ridgeback will definitely assure you of some colorful and bright moments.

Rhodesian Ridgebacks are generally healthy dogs. However, they aren’t entirely free of diseases.

They can suffer from Elbow Dysplasia, Dermoid sinuses, and even Eye Anomalies.

Nothing major, but definitely worth noting.

As for the care, a little exercise session every day is great.

Rhodesian Ridgebacks can quickly adapt to various homing and living conditions and won’t require much of your care.

A little exercise is all they need.

Some Vital Stats For Rhodesian Ridgeback

And finally, here are some fun facts about The Rhodesian Ridgeback you should know.

Some Interesting Facts About Rhodesian Ridgeback